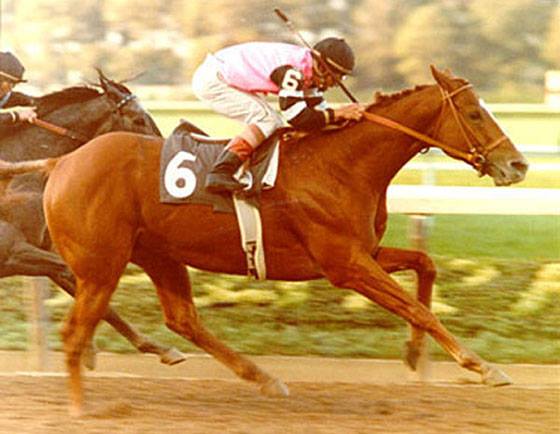 B R Big Red, a five year old, sorrel Thoroughbred gelding who was owned by Rodney Brooks at the time, was presented to Dr. Seale in September 2012 for difficulty breathing and abnormal noises while running.

After an endoscopic exam, Big Red was diagnosed with dorsal displacement of the soft palate (DDSP), which causes poor performance when exercising. The horse begins to make a “roaring” noise and exercise is compromised due to the airway obstruction. To correct the DDSP a laryngeal tie forward surgery was performed; permanent sutures were placed around the larynx and around the bones of the hyoid apparatus to bring the base of the tongue and larynx closer together. This procedure moves the epiglottis closer to the back edge of the soft palate resulting in a tighter seal between the nasal and oral cavity. Big Red’s airflow improved significantly after this procedure was performed.  Big Red was sent home on stall rest a few days after his surgery, and was able to return to training in 14 days.

Since his surgery in 2012, Big Red was claimed and has earned over $165,000. He has had 18 starts in which he placed top 2 in 11 of those races.  We would like to wish Big Red and his new owners a very successful racing career.