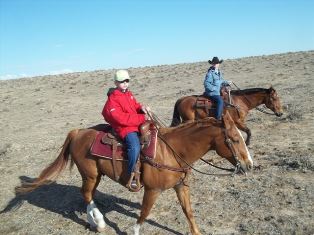 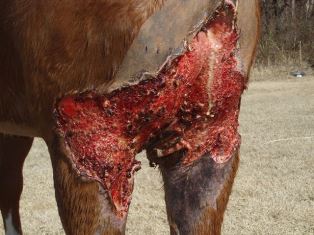 Our patient to spotlight this month is Juan, owned by Gary and Becky Kegley.  In January of 2008, Becky gave a routine intra-muscular injection in Juan’s neck.  Unfortunately he developed a Clostridial infection as a result.  It spread to his chest, thorax, neck and forearm with severe necrosis, skin sloughing, gas and fluid production.  These anaerobic infections are usually fatal, but Juan was treated aggressively by subcutaneous oxygenation, very aggressive tissue debridement and drugs to combat toxins produced by the bacteria.  Despite losing over sixty percent of the skin on his neck, chest and forearms, Juan recovered after months of therapy and care.

Juan healed beautifully and the Kegleys recently took him to the T-Cross Ranch branding in Colorado this past May.  Their son Cooper won a 4H Cutting Clinic with him as well.  At 21, Juan is still going strong and living a great horse life in Weatherford, Texas.