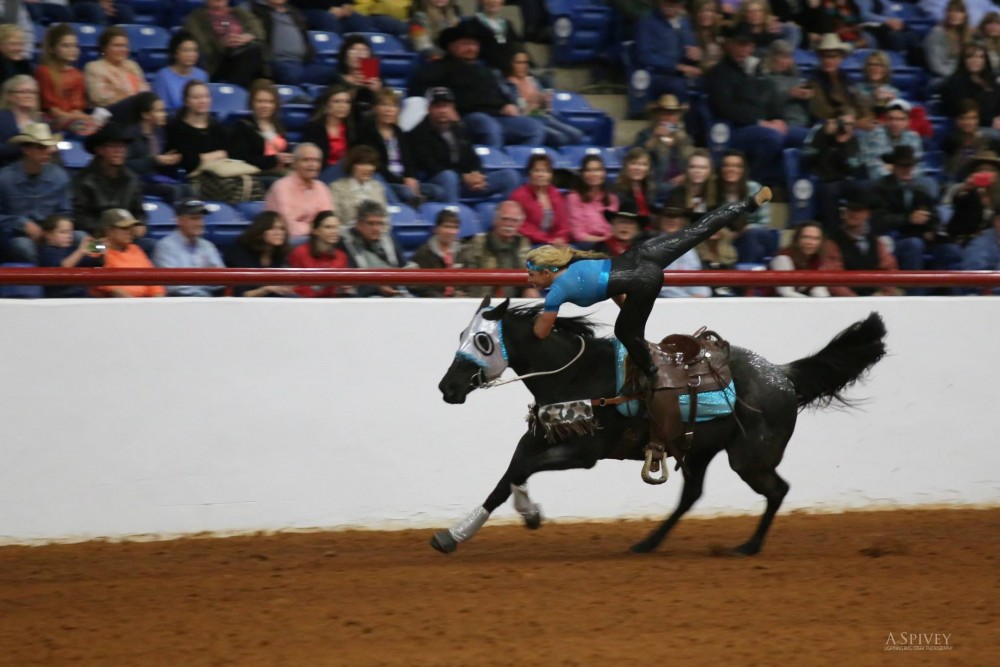 For October we have not one but two patients of the month. Both quarter horses are crucial members of the Dynamite Dames trick riding team. Journey is a 13 year old blue roan mare owned by Leah Self. Slick is a 15 year old gray gelding owned by Josey Kelley. In March of this year Slick was admitted on emergency with a severe, acute neurological condition. He was un-coordinated, blind, and ataxic to the point that he could barely stand or walk. He would stagger sideways and fall every few steps. A thorough neurological exam isolated the origin of the problem to the brain. Initial differential diagnoses were possible stroke/ aneurism, brain abscess, ingestion of a neurotoxic plant, or infectious central nervous system agent (including rabies). A few days later Journey, who was turned out in the same pasture as Slick, began exhibiting the same symptoms and was rushed to the clinic for treatment. This allowed Dr. Seale to eliminate multiple possibilities in diagnosis and focus more towards neurotoxic exposure. He made a trip to the farm to examine the pasture/premises for toxic plants, water, or other items that could have been ingested.  Examination of the hay revealed an abundance of seed heads that appeared to contain a fungus, which can often cause ergotisim.  While extensive bloodwork was run on both horses and analysis of the hay being fed was performed, high doses of steroids and other CNS anti- inflammatories were administered. Intestinal adsorbents were also given to reduce further absorption of potential toxins.

The test soon revealed the hay contained high levels of ergot alkaloids, leading to ergot poisoning. With diligent treatment, high quality veterinary medicine and expertise, soon Journey and Slick were back in the spotlight. Within a week of being diagnosed they were able to carry the Dynamite Dames through a series of performances in three different states. As the Dynamite Dames say, “When it comes to life’s adventures never pull back on the reins”.