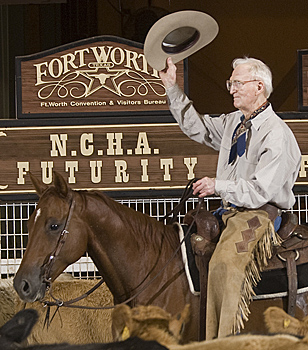 Our Client of the month is Spencer Harden.

Spencer Harden is a former Florida dairyman & NCHA competitor. He and his wife Peggy have made Parker County their residence for the past 28 years. At one time, Spencer was ranked as the All-Time Leading Breeder of NCHA Futurity Money Earners. Spencer compiled over 1.2 million dollars in earnings in his NCHA career.

Spencer has several Non-Pro Futurity Champions which include : Pecos Billie in 1972, Wee Darlin in 1975, and Jazabell Quixote in 1982. In 1989 he rode July Jazz, a horse he raised & trained, and won Reserve Champion in the Non-Pro Division & Open Futurity Champion. At that time, the sixty year old champion was only the second Non-Pro in NCHA history to win the Open Futurity Category. Click on the video to watch his 1989 winning run.

In 2005 one more great milestone in Spencer’s cutting career was achieved, he was inducted into the NCHA Non Pro Hall of Fame.

November 2011, the NCHA Futurity Champions Cup made the crowd breathless when many past futurity winners were honored with walking to the herd one more time. Spencer was 82 at this time and never missed a beat as he cut his cattle out one at a time. As usual, Spencer was one of the crowd favorites. It was a great way to honor all the past champions.

This is just a small list of achievements of a great man. Trophies & earnings are too numerous to name. Congratulations to such a fine individual!!