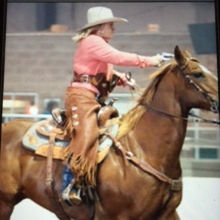 Our client to spotlight this month is Terry Ogle.  This Clay County resident has long been a horse enthusiast and began barrel racing years ago. She spent many hours in the arena getting her horses and herself ready to compete.  Terry and her daughter, Taran, traveled and competed in barrel races all over the state.  They both loved the competition and camaraderie that came with this event.

As luck would have it, Terry found herself at a mounted shooting competition.  She was intrigued by this new sport and was determined to try her hand at this.  The only problem was this being one of the newest equine sports, there were not a lot of knowledgeable people in her area to serve as mentors.  After some searching, Terry found a trainer to take lessons from and teach her the basics of the sport.  She, and her horse “Chuck”, learned together, and they learned quickly.

She joined the CMSA (Cowboy Mounted Shooting Association) and the MSA (Mounted Shooters of America).  Shooters, dressed in western attire, use a .45 caliber single action revolver that is loaded with a brass cartridge that contains black powder blanks.  After firing, the unburned powder and gasses from the blank bursts the balloon.  The courses are set up to test the athletic ability of the horse as well as the rider; each missed balloon or dropped gun is a five second penalty and a ten second penalty for not completing the pattern correctly.

Terry attends local shows to compete against her skill level; she has made a lot new friends in this latest horse related endeavor and although she still enjoys barrel racing, she recommends everyone try Cowboy Mounted Shooting.